While light waves sent over fiber optics enable rapid data transmission, the â€œlast mile,â€ from fiber optic cable to your home’s Internet outlet, can be the most difficult and expensive part of the trip. . In the future, a new light modulator developed by researchers at ETH ZÃ¼rich, with support from the University of Washington, could cover the “last mile” where data must travel efficiently and at low cost.

The â€œlast mileâ€ of the home Internet connection is also the most demanding. The new modulator is a viable alternative. In it, the data transmitted by millimeter waves (red arrows) can be directly converted into pulses for the optical fiber (yellow). Courtesy of Y. Salamin et al.

The modulator consists of a chip which contains the microwave antenna. The antenna receives the high-frequency microwaves, or millimeter waves, used for data transmission and converts them into an electrical voltage.

At the heart of the modulator is a narrow slit, a few micrometers long and less than 100nm wide. The slit is filled with a material sensitive to electric fields. A light beam from the fiber is introduced into the slit. Inside the slit, the light propagates not like an electromagnetic wave, but like a plasmon. Plasmons – hybrids made up of electromagnetic fields and oscillations of electric charge on the surface of a metal – can be confined much more tightly than light waves.

The electrically sensitive and non-linear material inside the slit ensures that even the smallest electric field created by the antenna will strongly influence the propagation of plasmons. The influence of the antenna on the oscillatory phase of the waves is preserved when the plasmons are reconverted into light waves at the end of the slit. The plasmonic mixer directly maps the wireless information to the optical signals. The data bits contained in high frequency millimeter waves are transferred directly to light waves.

The plasmonic scheme provides an integrated field enhancement in an ultracompact metal-oxide-semiconductor compatible structure. The plasmon mixer is not limited by electronic speed and is therefore compatible with future Thz technologies, the researchers said.

In a laboratory experiment with microwave signals at 60 GHz, researchers were able to demonstrate data transmission rates of up to 10 Gb / s over a distance of 5 m and 20 Gb / s over 1 m. 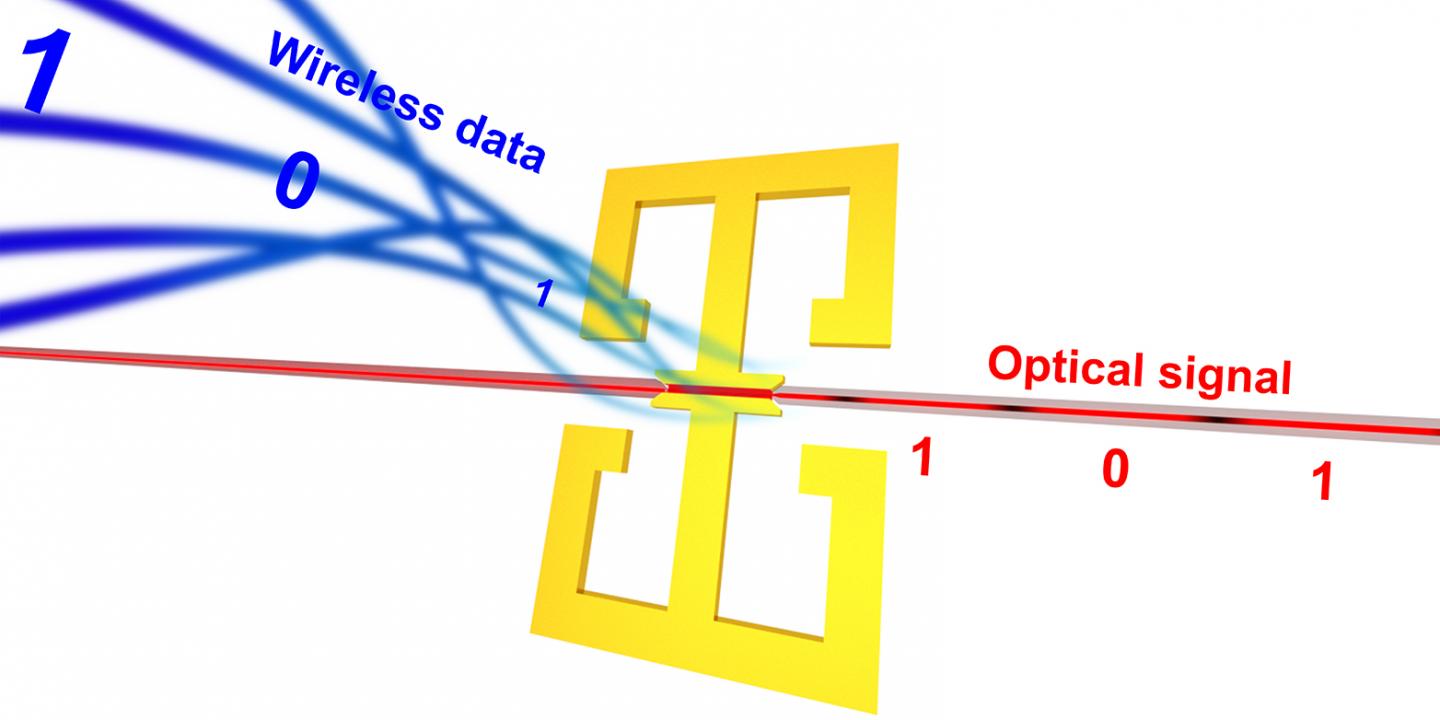 In the new modulator developed at ETH ZÃ¼rich, millimeter wave signals (blue) are received by an antenna and converted into optical signals (red) inside the small slit in the middle. The device operates without power and measures less than a millimeter. Courtesy of ETH ZÃ¼rich / JÃ¼rg Leuthold.


The light modulator works entirely without batteries or expensive electronics. “This makes our modulator completely independent from external power supplies and, moreover, extremely small so that it can, in principle, be mounted on any floor lamp,” said researcher Yannick Salamin. â€œFrom there, it can then receive data via microwave signals from single-family homes and feed it directly into the central fiber optic. “

In addition to its compact size and low power consumption, the new modulator has other advantages. â€œThe direct transfer of millimeter waves to light waves makes our modulator particularly versatile with regard to the frequency and exact format of the data encoding,â€ said Prof JÃ¼rg Leuthold.

According to the researchers, the modulator is compatible with new 5G technology and future industry standards, based on millimeter wave and THz frequencies of 300 GHz and data transmission rates of up to 100 Gb / s. It can be built using conventional silicon technology, and therefore at relatively low cost.

Unlike radio or microwave waves from a Wi-Fi modem, which propagate evenly in all directions, millimeter waves can be focused to propagate just between the roof antenna and a light pole inside the house. ‘a bundle of 20 cm in diameter. This could significantly reduce the power required for transmission, compared to other wireless technologies. It could also eliminate the typical problems of Wi-Fi modems, the signals of which can interfere with each other.

[ad_1] Providence RI – Today, Verizon – in partnership with Motorola, Samsung Electronics America, Inc. and Qualcomm Technologies, Inc., a subsidiary of Qualcomm Incorporated – completed the world’s first 5G data transmission to a smartphone over a commercial 3GPP 5G network. Radio (NR). This successful test was performed with a moto z3 paired with a […]

Thales’s TMA 6000 very high speed data link terminal has been certified as STANAG compliant1 7085 Implementation 2 (European standard) after successful test by the DGA. The TMA 6000 was certified as compliant with Implementation 1 of the standard in the United States in 2014. This dual interoperability allows platforms equipped with the TMA 6000 […]